Everything you need to know about mixing cannabis and sex

Neverending parties, busy clubs, good-quality alcohol, and weed have made Barcelona a number one nightlife destination for free-spirited Europeans. Everyone knows: if you are up to some fun, there is no better place than Spain.

Are you looking for exciting new ways to spice up your sexual relationships? Then you might want to consider mixing sex with smoking cannabis. A traditional aphrodisiac in many cultures, marijuana is believed to have strong libido-boosting powers. Indeed, some users claim that smoking weed right before sex can bring the whole experience to a new level.

Sounds intriguing? In this article, we will investigate whether or not cannabis improves your sex life, what possible effects weed might have on your body, and what precautions you should take beforehand. Let’s get started!

Is that true that cannabis makes sex better?

Does cannabis help sex? Unfortunately, there is little scientific research on the topic of stoned sex, and all existing papers are predominately based on men’s experiences. For example, 78% of participants of a 1979 study published in the Journal of Clinical Psychology were male. Another survey published in 1984 in the Journal of Sex Research also interviewed mostly male college students and focused on marijuana and sex drive.

However, despite the lack of scientific data on such a burning question, researchers found some really interesting facts. For instance, male participants reported that after smoking weed they feel:

But what about women? To find out what females thought and experienced, Becky Lynn, director of the Center for Sexual Health and associate professor of obstetrics and gynecology at Saint Louis University, conducted her own survey.

Three hundred women filled out the questionnaire to close the research gap. The findings were somewhat similar to men’s studies. Women who used cannabis before sex reported:

Overall, research shows that weed does bring in new exciting sensations but are there any possible drawbacks? 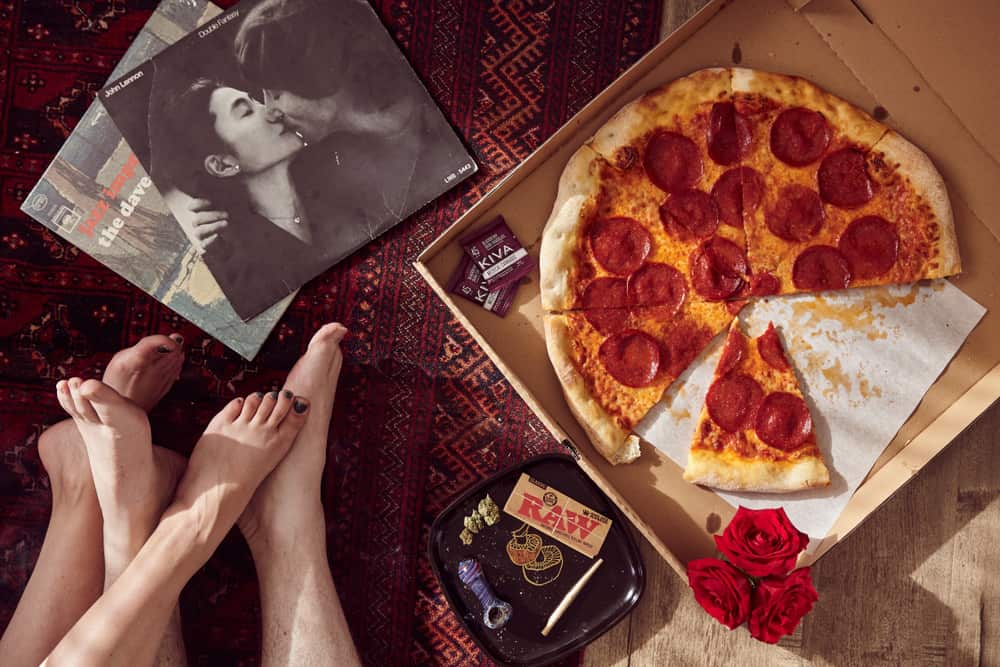 What are the potential risks of mixing weed and sex?

A 2010 paper published in the Journal of Sexual Medicine found that men who used weed on a daily basis had difficulties reaching orgasms. Among heavy users, marijuana can also negatively impact male arousal and sperm production.

Another paper suggested that cannabis could actually increase the risk of erectile dysfunction. The scientific data is contradicting, and it’s hard to assert whether or not combining smoking weed and sex is a good idea. To find a more definite answer, we took a closer look at real people’s testimonials.

What do regular people think about sex and marijuana?

Let’s put scientific research aside and focus on what regular people claim to experience while having stoned sex. Jeff Dillon, Xblaze’s founder, shared his take on cannabis and sex. According to Jeff, cannabis makes him ten times more sensitive and tactile. Also, he noticed that the right amount of weed makes his orgasms brighter.

In his opinion, weed can also help those with erectile dysfunction as the substance reduces stress and anxiety related to intimacy with someone. On top of that, he says that weed has a superpower of making you last longer in bed.

How not to ruin your first high sex experience?

Weed is a psychoactive drug, so it is expected that people react differently to it. If you don’t know your possible reaction to the substance, take some precautions. You don’t want to experience any of the side-effects during your first stoned sex.

First of all, it is essential to start low and go slow. Probably, you should try out a solo adventure first to see how your body reacts to cannabis and stimulation. Only after you know your possible reactions, you can bring in your partner. You might want to consider sharing this experience with trusted partners to avoid feeling paranoid and stressed out.

Practical tips for having the best possible experience

Pick the right strain of weed: certain types of cannabis are just amazing for having sex. Usually, sativa strains enhance the overall experience, lift up your spirits, and intensify orgasms. However, it is best to experiment with different strains before your big night to find out what works best for you.

Use enough lube: Weed can cause dryness, so it is smart to stock up on lube beforehand. Fortunately, there are enough products on the market to choose from.

Stay creative: Some cannabis strains spur creativity. So if you find yourself trying out a weird sex position, just embrace it. You are exploring new things.

Keep your dose low: It is crucial not to get too stoned. If you are disoriented, you won’t enjoy the moment as much as you could. Also, you could use cannabis after sex to increase your relaxation.

What are the best weed strains for sex?

Looking for a cannabis sex enhancer? Your choice should depend on the desired effect.

How much weed is okay to consume?

Don’t forget to go low. You should consider starting off with only 5 milligrams. Then you can increase your dosage to find out what is most comfortable for you.

Can I have edibles for stoned sex?

It’s better to stay away from edibles as it is quite difficult to measure your THC intake. You don’t want to end up being too high on your big night.

Don’t be afraid to experiment

So, does cannabis make sex better? Usually, people who use weed to enhance sex report having only good experiences, especially when it comes to using cannabis for sex drive. However, weed might make you feel uncomfortable and stressed. Experiment with the dosage, do it with people you trust and see what happens. Maybe marijuana and sex combination is what you have been looking for.

Now tell us about your take on the topic! Have you ever tried mixing sex and weed? If yes, what’s your opinion? Did you like it, what was weird about it, what are tips? If not, would you like to try cannabis sex therapy? We want to know all about it.